My Mesmerizer, a stand that holds upside down propane torches

This was my first attempt with my brand-new Maslow system. I had a long learning curve trying to get started, since I partially damaged my Arduino system in the process of building my easel.
I spent a long time trying to configure the chains properly, hey half a dozen calibration trials we’re required to get the sled into the middle of the sheet of wood evenly. Most of my issues were caused by just not having any experience in doing this type of work before.
First I put together the X and Y motor and try to calibrate the system with just those two motors. I thought that this might be an easier way to get started. However when I connected the Z motor I found out I had damaged my Arduino. My problem was I mounted the Arduino to the back of the easel plywood. That seemed like a safe place, and out of the dust stream, but while trying to move it, the plywood easel board slipped off the easel stand and smeared my Arduino off the back of the easel board. This pulled out and ripped some of the connector pins damaging the unit beyond repair. I reached out to the community for help and was immediately contacted by Gab at the East Bay Source, where I had purchased my kit and was offered a replacement Arduino for no-cost. You can’t believe how amazing that experience was. I never thought that I would get a replacement for nothing, and was completely blown away by his response.
After the replacement was in, my Maslow functioned perfectly. It took me sometime to convert my illustration in Adobe Illustrator to a cad file, which I managed through Inkscape. Once the file was converted to the proper format, I brought it into JSCut, to turn it into a Cam format and write the GCODE.
I move the G code to my laptop fired up my Maslow software and gave it a try. I used some large sheets of paper on my easel to draw the entire pattern with a sharpie first. Then after seeing that it was actually going to work, I got out of my first piece of plywood and started my first cut. Well I work in a small garage area and the Maslow easel barely fits in this space. On my first level of cut, one of the weight bricks touched one of my racks and made a large jog in the cut. Woops, I’m going to need a little more space around this project if we’re going to use the entire sheet of plywood. That’s enough copy for now, I will put some pictures in this to show you the results. 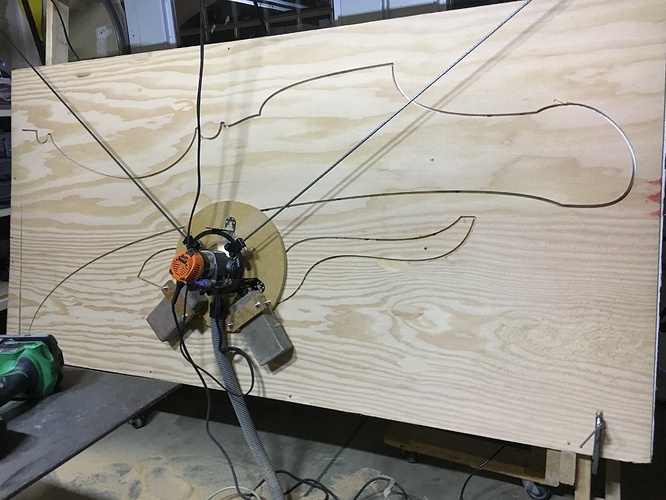 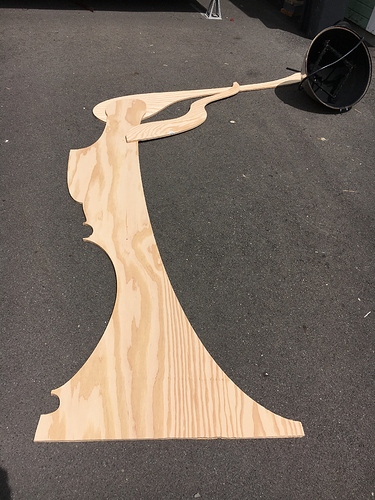 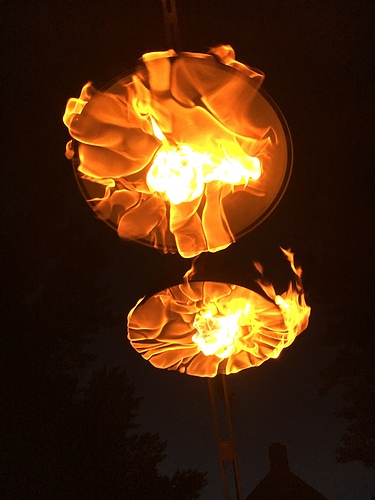 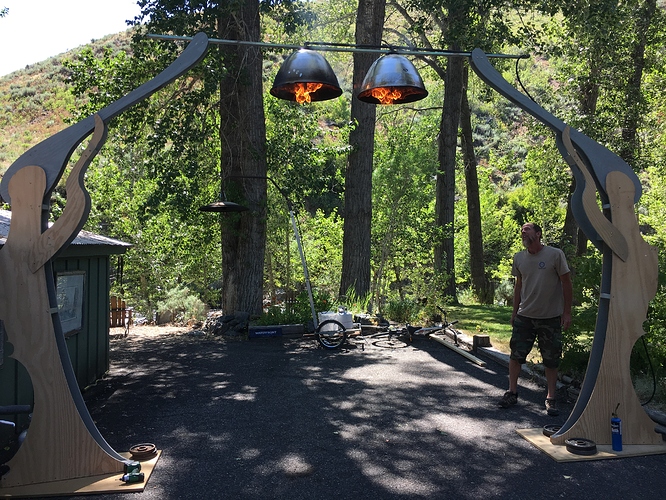 The Maslow brings the term “Trial and Error” to a whole new level! Your first project is fantastic! Please keep us posted on your progress.

Those are too awesome! Great first project and definitely lives up to the name!

Very cool! Bit off the CNC topic, but can you point me to some sort of instructions for the upside down propane torch?
Does it provide heat like a patio heater in addition to the beautiful flames?

Hi Andy, it’s really almost too simple to do this, the fun of it is making the stand more than anything else. I used the reflectors from my old lights in my shop that were replaced with florescent fixtures. But I have a friend who made another one using a much shallower fire pan. Almost like a snow pan, if you will. And the results of our experiments with both of these torch fixtures was that the shower wider pan was easier to get into their cool mesmerizing state than the deep reflectors that came from my shop. Use a propane tank and an adjustable regulator coming into metal pipe. And then at the end of the pipe of plug with several holes for several slits to let the gas out. The gas entry into the pan should be above the theoretical line of the rim so that the gas stays in the pan and starts burning properly, it doesn’t escape the pan without burning.
The torque gives off lot of heat, as much as any fire pit ever gave off, so it’s use above the fire pit or as a fireplace is recommended. The burning propane is all yellow flame so there is a lot of carbon involved with the combustion process remember that when you’re moving your torque around, or trying to adjusted it the carbon is amazingly sticky.