How did you fix it? Did you have to rebuild the frame or was there an easier fix? I really don’t want to have to take this frame apart, but if I have to, then I have to.

Jwolter; If I do that, won’t that push the motors backwards? I see what you’re saying though. Add some wood to the bottom of the legs then trim the back to make the bottom of those board level. I feel if I didn’t cut the back and it was on an angle, it was have too much vibration.

For a quick test, you could put a block under each front leg. If you find you need to alter the frame, consider shortening the back legs instead of lengthening the front ones.

Madgrizzle, I did the frame from plans on the site. I didn’t know the exact measurement where to attach the back leg to the front leg. I think that’s where I got my angle.

I think that’s a good idea. Will it be an issue during the test that the motors will be farther back and not on a 90 degree angle with the floor?

I believe it did that. Just wasn’t sure where the legs met. 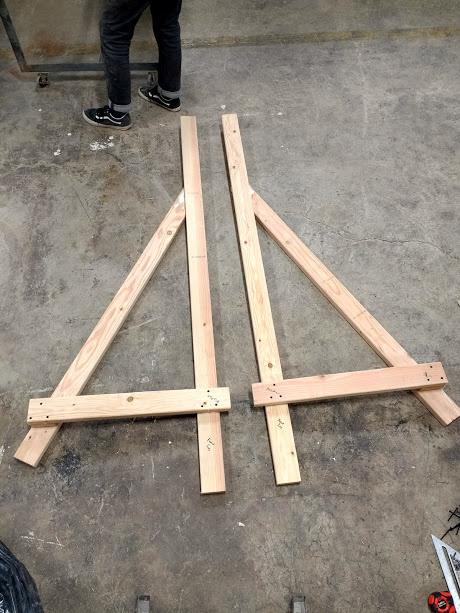 If the bottom left edge of the kicker is on the outside edge of the back leg, just rotate the back leg to a point that it can be attached to the front leg. It should be close enough.

Thanks guys. Any way to fix this besides completely disassembling the frame?

Just put some wood under the front leg to raise it. Is it attached to the wall behind it?

Ok thanks Mad. Do you think it would be an issue with the motors then going back a little since the frame then would tilt back more? Yes, I did attach it to the wall to reduce vibration, but I can disconnect that.

Ahhhh now I see… sorry carpentry isn’t my calling to life. I’m learning though. You guys are great.

The motors’ sprockets should be parallel to the front legs and the plywood sheet, so they will be at the 10 - 15 degree angle too.

If you guys are ever in eastern Pennsylvania, I owe you a drink.

if you just used screws, I’d suggest trying to take the back legs off and repositioning them to where you get the right angle (that’s what I would do). If you had someone to hold it at the correct angle as you rescrewed the legs, you wouldn’t have to disassembly it completely.

You might be able to tie off the top beam to the garage door track to keep it “upright” as you do it as long as you have something keeping the front legs from sliding forward and tearing your garage door apart.

Madgrizzle, I did the frame from plans on the site. I didn’t know the exact measurement where to attach the back leg to the front leg. I think that’s where I got my angle.

you were supposed to make it so that the bottom of the back and front legs were together, and then pivot the back leg.

Ok thanks. I’ll give it a shot. I worked on it a little last night. I just left with the family for a mini vacation. I’ll work on it again on Friday morning. So you guys don’t think I’m using the correct type of bit? Also, can anyone recommend a good iPhone app for the angle?

good iPhone app for the angle?