I need some help getting up and going with my first machine. Here is a link to my documented build.

Hi all, I am recently new to the community and I would love to share my build. First and most importantly thank you everyone in this community for being a inspiration. You guys are a collection of awesome! Next buckle up buttercup this is going to be detailed. Now one to the fun details: First off the frame: I knew I wanted a hinged frame so that was where my build started. I found an article posted by Tom_v which is what I based my frame off of. The link to his build can be found here. [Tom_…

The steps taken so far

Here is the code loaded into ground control.
scannerv3.nc (1.5 KB)

The second issue I have is the rougher holder came loose while cutting. I think I was afraid of over tightening the rougher bracket. I didn’t want to crush the rougher and wear it out faster.

Where do I go from here?
Try to do a re-calibration and tighten the clamp on the rougher?

Any help would be greatly appreciated!!

When you changed the weight of the sled (by adding the z-axis) you affected the calibration, but to be honest, I wouldn’t have expected that much of a change. Nevertheless, that’s likely the culprit.

Thank you for responding!

I measured the weight of the sled before and after the upgrade. Here is what I came up with

The sled alone with metal parts and no bricks was 5.16 lbs.
The Z axis parts and hardware weighed 4.3 lbs

Would the .36 lbs make that much of a difference? So doing a re calibration would fix that issue?

Definitely recalibrate. I would question the original calibration or perhaps you jumped a chain tooth somewhere in there. At a minimum, reset your chains.

Would the .36 lbs make that much of a difference? So doing a re calibration would fix that issue?

No, that would be shocking if so. I’m now thinking as @orob suggested that the chains are not where the controller think they are. Before recalibrating, try resetting the chains. If you marked the chain link that was on the top tooth of the sprocket during the calibration process, it will be fairly quick to do:

How To: Manually Reset Chains, the Easy Way Wiki

Every now and then you may find that you need to readjust the chains back to a known position. This could occur if you power/connection issue and the controller lost it’s position, had a chain skip, took apart something for some reason, etc… Fortunately, there’s a way to reset the chains without a lot of work. During calibration, after you set the sprockets vertical, you extend the chains out to reconnect to the sled. If your “Extend Chain Distance” is a multiple of a full revolution of the s…

Thank you for sharing that article! I would still have to do a calibration first then I could mark the chains and If I needed to reset the chains in the future I could do this?

You might get by without redoing the calibration because of the effort you put in to equalize the weight, but I would still recommend doing it and marking the chains in the process so you can reset them in the future, if needed.

This evening I tried to do a re-calibration I got to the step 11B (wiki: how to get calibrated) in the calibration and something seems off. The left chain stops extending at about the middle of the machine 4X8 plywood. Where as the right chain seems to stop extending 1ft from the floor? When I did this before the chains were hanging equal length. Is this right? I have done this step 3 times and same results every time.

I hit the move to center button. The chains are still different lengths from the center of the motor to the end of the chain. The left is 64in and the right is 69 in.

What do you see when you run Actions -> Test Motors / Encoders? Maybe one of the encoder signals is not making it back to the controller board?

I ran the motor test, everything seems to pass. This is a screen shot of ground control. 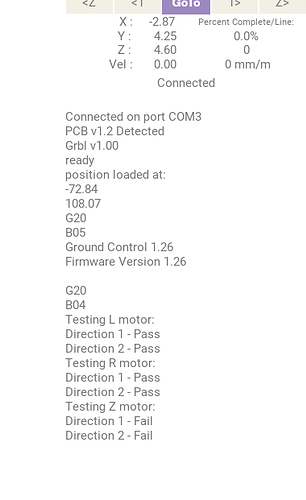 OK, that is good news. At least we are probably not looking at a hardware issue.

My guess about what is going on is that some calibration value is way off and is causing something to work incorrectly. Under Actions -> Advanced there are buttons to wipe the EEPROM (which are the calibration values stored on the machine) and to restore the default settings: 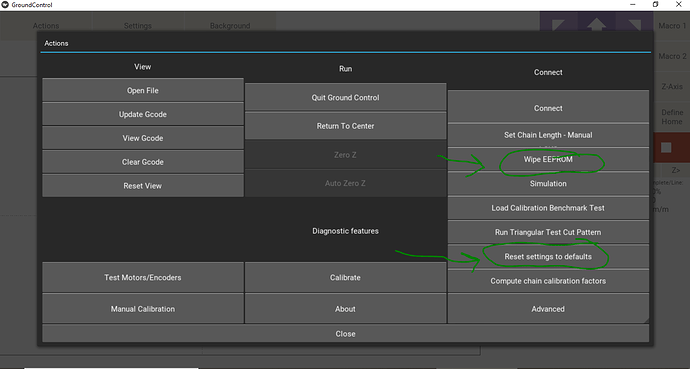 You could backup your settings before doing that, but given how far off they are now it’s probably not worth it.

Starting from a clean slate I think is the next thing to try.

Thanks for that recommendation! That seemed to help with the chain issue. Both chains now end in the same spot and I was able to move onto the next step.

This created another issue. Cutting the Calibration cut. Cut number 1 went really well. As the sled traversed to cut number 2 the z axis kept going up and up and up until it hit the limit of the C-Beam. I stopped the cut because I was afraid I was going to damage the C-beam.

OK. On to the zaxis. I think the issue there is the failure in the zaxis motor in the test. Often times this is just caused by a loose cable. Can you unplug and replug the zaxis cable on both ends and try running the test again?

Solution: The first issue was the software I’m guessing. Restoring defaults and wiping the eprom seemed to fix the chain length issue. The second issue was with loose cables on the motors. The motor test proved them out. Did a cut last night from fusion 360 (the same one shown above) it worked beautifully!

Thank you everyone for the help!