My friend got a Maslow kit right off the bat, and it has sat in his drawer until recently, when I started to assemble it. I’ve got the frame together, and have started on the temporary sled. But, I don’t have the ring, or, seemingly, any of the parts from the ring kit.

Here’s what I’ve got left: 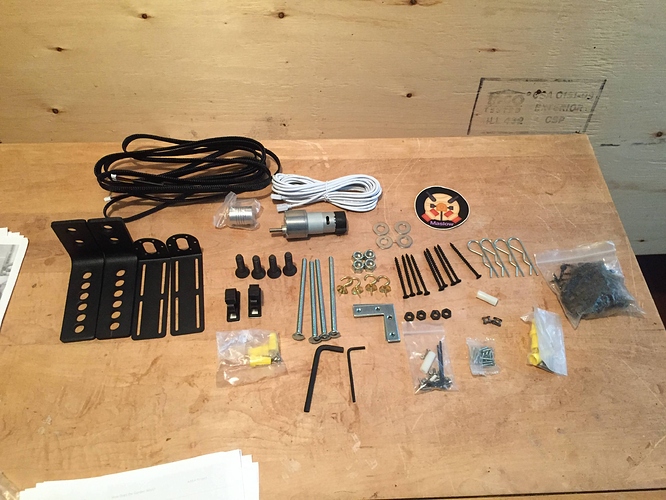 I do believe I’ve got an automatic Z Axis controller setup.

This post makes me think there was an older design that didn’t include the ring. If so, can someone point me to the steps to build it?

Alternatively, I’m not unhappy to buy a ring or linkage set or other upgrade [especially if I can get it shipped from within Canada]. I’m open to 3D printing things, too, if there are plans or it is likely to work.

Thank you so much.

that looks like a z-axis motor, cable and shaft coupler. You should have either two motors or three. One does not make sense. I am not familiar with the original kickstarter kit, so I not sure of the brackets…

There are also alternative methods of hanging the sled, not sure if anyone is still selling them.

Just want to be clear that there are three motors altogether; two of them are on the frame now. I believe I have all the parts for the Automatic Z Axis Kit, although I’d better check those tiny hardware bags.

Can anyone speak of how effective the different ways to link the sled to the chains are? Is the ring the best? Is the very original kit good enough?

Is that the original kit?
Link to original sled, you may want to upgrade to ring or arms.

Thank you very much, Kayaker37.

Looks like you have the original kit with the z-axis. The big brackets held the ends of the chains in this early version.
I would suggest a linkage kit or ring, either would work well, and an upgrade of the z-axis to the 3D printed version, the meticulous or similar. Those upgrades are all well worth the effort.

One related question: as I only have one router and want to use it for things other than CNC machine some of the time, are there any setups that are better than others for easily removing it and reinstalling it in the Maslow?

I am not aware of a good solution in the forum, but that doesn’t mean it isn’t there.
Obviously the stock z-axis wouldn’t work cause the router base is bolted to the sled. You would need a z-axis like the 3D print or the meticulous that has a quick release but still holds it well.
That is possible, with a little bit of tinkering, I’d say.

I’m inclined to think that unbolting the router isn’t a big deal, but re-attaching the handles seems like a nuisance. (Although, as I write this, it doesn’t sound all that bad). I’m going to check out the meticulous Z axis right now.

Good Luck. Would be nice to see some day what you came up with.

I would think that fabricating or 3d printing a linkage kit would be the lowest cost start for triangular calibration. If you want a removable z axis with the standard mount not bolted down (I do this with my hitachi router) build a meticulous z axis and then you can slide out the router and put it in its base for standard use, then drop it back into the sled mount for maslow use. taking the sled off to unbolt the router each time I needed to use it for something would get old fast. Do yourself a favor and build or buy a good z axis to start with and then you will have the setup you mentioned.

Thank you, Orob. I hope I can get something built today! I’ve started 3D printing a linkage kit, and now I’m trying to figure out what to do about Z motion, and looking into why the Meticulous Z axis is thought to be the best.