my birthday is coming up, so I thought the Maslow/Makermade CNC machine would be a very nice gift to ak for

But after looking at You Tube, different websites and this forum there are still some questions that linger. Hopefully you can help me out…

Hi BlueDog
I am also in Europe… looking at the BOSCH POF1200 as the AEG is way more expensive… Here is the conversion hack. 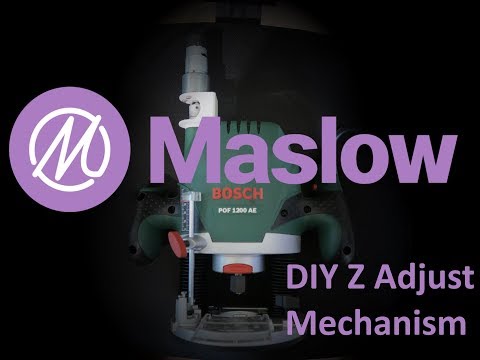 Thank you for your reply and info. Very useful! Ill be sure to look into that! Good to see the user forum is up and running. I’n sure a lot if people can give and use good tips.

thank you for your reply. I’m glad the metric scal will work and there is no crazy maintenance schedule.

@Bluedog have a look at the pictures in this post from a day after yours - it illustrates how people are using C-Beam assemblies from online stores to adapt all manner of existing routers:

I got a used Maslow from FB Marketplace with the z axis motor but no router. I had an old heavy Craftsman router but the z axis was crappy and had less than 3/4 inch travel. So I decided to use my Makita trim router with this z-axis c beam. I got two sets of pulleys and belts to have a 60 20 gear ratio from the 6mm motor to the 8mm screw. I directly used the 8mm and drilled the 5mm hole with a 15/64 bit from harbor freight. I could have skipped the 8mm pulleys and just enlarged both 5mm pul…

I have done this myself to adapt an Ozito brand router which is what is sold at the local improvement store here in New Zealand.

If you are of the skill-level to build a maslow frame then you could probably attempt this sort of apprach for your Z automation too.

they work great with our kits. We can ship to Europe for about $125 for a full kit.
Metal Maslow No Router or Clamp INSTOCK | MetalMaslow