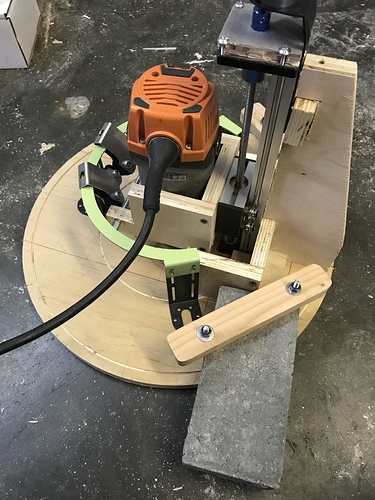 Dude, that look cleaner than mine. I ordered the 100 mm and they sent me the 300, it is a skydive tower on my sled. but, it works. I do have play side to side on my rail. how did you get the bearings tight to the runner? And where are the files you cut? Mine barely fits in the ring.

What kind of accuracy have you been having on your stock z axis? I think I’ll definitely want to build something more like this long term but I am curious as to other people’s experience with accuracy of the z axis using the rigid base.

It’s good as long as you use the bungee but the magnesium parts and plastic on the screw wear fast!

Here is the upgraded sled with pre-drilled holes for Kinematics (either kit). There is a small amount of slop designed in for 3/4 inch plywood, but i’d still say check all of my measurements before cutting. Let me know if you have any questions.

Has anyone had success with a spindle yet? Or experience with one? I’m wondering if a 500W spindle would have the necessary power for the Maslow?

I haven’t received the maslow yet, but since everyone is mostly using 1/4" bits, then I think a 500W one is good. I was also thinking of just using something like the Dewalt DWP611 or Ridgid R2401 which are used often on hobby CNCs. It seems on first glance that such a big machine should have a big motor, but if it using the same bits, then I don’t think it does.

@eppic I think I have the bulkiest router, and it has to go at one point. There are nice builds and suggestions for the Z move, like in this post.
z-axis
500W is exactly where I will start looking for a good air-cooled spindle.

Well, I bit the bullet and ordered the z-guide from the beginning of this thread. I also ordered their 500w spindle with rpm controller and collets for 1/4” bits and a range of metric sizes as well…

Ok, so I bought the new Z axis, fit it and, built a holder for the router. It had too much play for me. I reinstalled the router base, cutting off about .5 inch from the top. Cut down my holder to do the lifting and it is pinch fit at the top of the router. The bottom rides up and down in the base. Can use it for dust collection too! 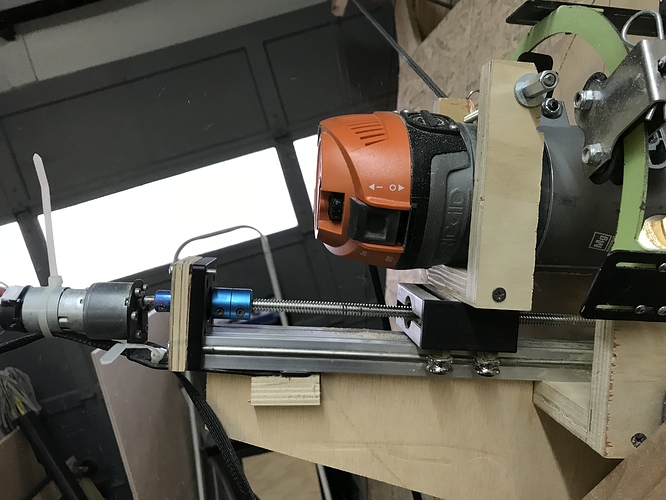 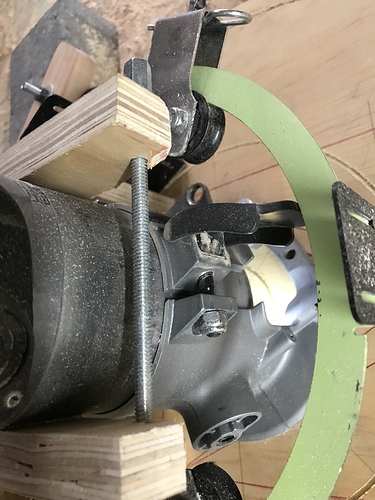 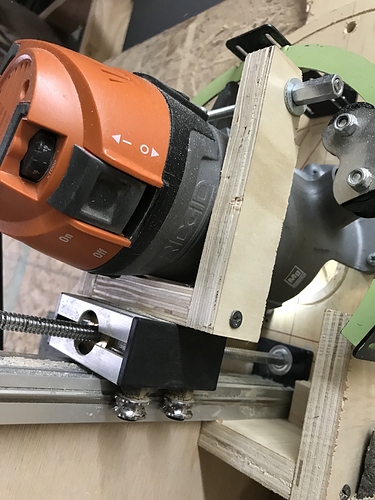 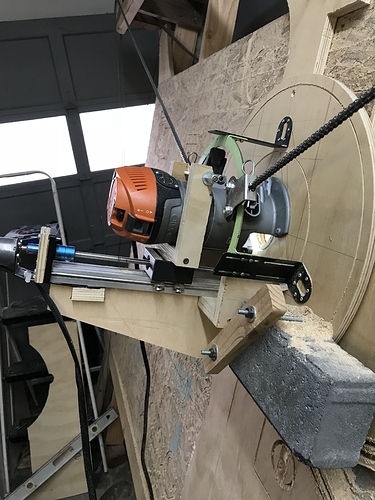 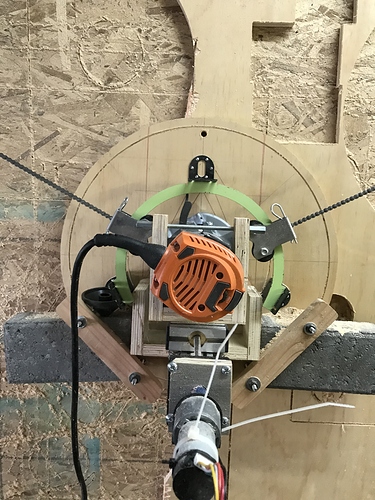 Nice build! After building it, what length would be the shortest to work? 100mm?

Is that the same 200mm one from banggood? If so, do you find the rails on yours also have no slop and what part(s) did you use to adapt the z motor to the setup?

I ordered the 200 but they sent a 300. But yes. They have very small “slop”, but too much for me, so I put back the base to hold it still. I used the stock z motor, with the stock z shaft adapter. I cut the small plywood square to use for the adapter guide. Then used a wood pin to connect the two adapters.

I have ordered a spindle also to replace the Ridgid Router. I was thinking of maybe adding a linear rail to the opposite side of the spindle from the z actuator to stabilize it if needed. I’ll have to have it all arrive first…

What spindle did you get? Air or water cooled?

Air vs water cooling has been the subject of several topics on CNCZone.com lately (search for that), one example below. They’re both reportedly quieter than the actual cutting noise (on machines much faster than a maslow) and also reportedly have the same longevity. Since the only one I’ve see in person (in Southend-on-Sea, like the name) was a small (800w iirc) and quiet water cooled one I can’t testify as to the difference

I ordered this spindle package: It is so cheap and I think it should be adequate for the slow cutting speed of the Maslow. Air cooled. Reviews on it are really good to, so we’ll see. Should bolt right up to the z axis, just have to make some sort of dust collection shroud.

It’ll be interesting to see how that spindle works. They’re popular with the x-carve crowd, which is a smaller but much faster machine.

One drawback is that it’s less than 40% of the Ridgid router’s power, but that might not be a significant difference at low speeds. Happy testing!

One of the BLDC RC motor spindles could be a real interesting project. You can replace the 8mm shaft in the bigger ones with an 8mm ER11 collet adapter. Iirc Bart Dring (of MakerSlide fame) did this on buildlog.net, plus there’s others hiding on Giggle

I’m typically a more power is better kind of guy (aren’t we all) but I think in this case, because of the minimal amount of material being removed at such slow speeds I expect the 500w has more than enough power, not just adequate. However, it’s a guess. It was cheap enough, and gives RPM control which is something that can be very beneficial. So if all goes well, it will actually be better than the ridgid. (I have that router as well, so I can use it if needs be of course).

Another advantage is when using a z-axis, it just bolts right up, no needing to make a mount so there won’t be any give there at least. I think between the far more accurate z-axis, and RPM it could prove to be a great fit.

Time will tell though.

After determining that a 150mm rail will get me the 2 inches of z-travel that I want, I took a chance and ordered this z-axis from eBay: http://www.ebay.com/itm/263558115721. Dimensions are scant, so I decided to just bite the bullet and order one.

Worst case scenario I will send it back and design one from scratch using this kit as a starting point: http://www.amazon.com/dp/B0797Q2C92. I’ve got a mount and an anti-backlash nut picked out to complete the parts list. Really prefer to avoid design work if at all possible though…

My eBay order should be here next Monday; will report back with how it goes!

I’d like to see pics when you get it. I looked t one like that but was not convinced I would like the mounting setup, but think it would be easier to have rigid. The one so went with the entire length of the vertical rail can be secured against a backing. An experiment for now.