SO, given the amount of humidity that has been going on where I live, and the fact that my workshop is unconditioned (for now) I have been experiencing a lot of corrosion on the stock router body. Removing it before each use is not a great solution, so I am thinking I am going to set up a more traditional z-axis (and also to help avoid z-axis consistency errors). I am thinking of going either the open builds or Banggood routes and would love to hear the pros and cons people have found with those (I like the idea of a metal axis for ease of mounting on my metal sled).

I’ve been scouring the various z-axis posts and thought “why isn’t this it’s own subheading like “sleds” or “frames” in the Hardware category?”

To that end, can we get that sub-category? And would those that have already set up a non-stock z-axis be willing to post a few pictures? I’ll also edit this thread with links to some of the other z-axis threads.

Thanks everyone. I’ve been busy trying to get the kid’s tree house completed before the end of the summer, but I am starting to look forward to some more Maslow time once that is mostly done. Here’s a picture of my current non-Maslow time sucking project (though I do have plans to embellish it with Maslow made items later): 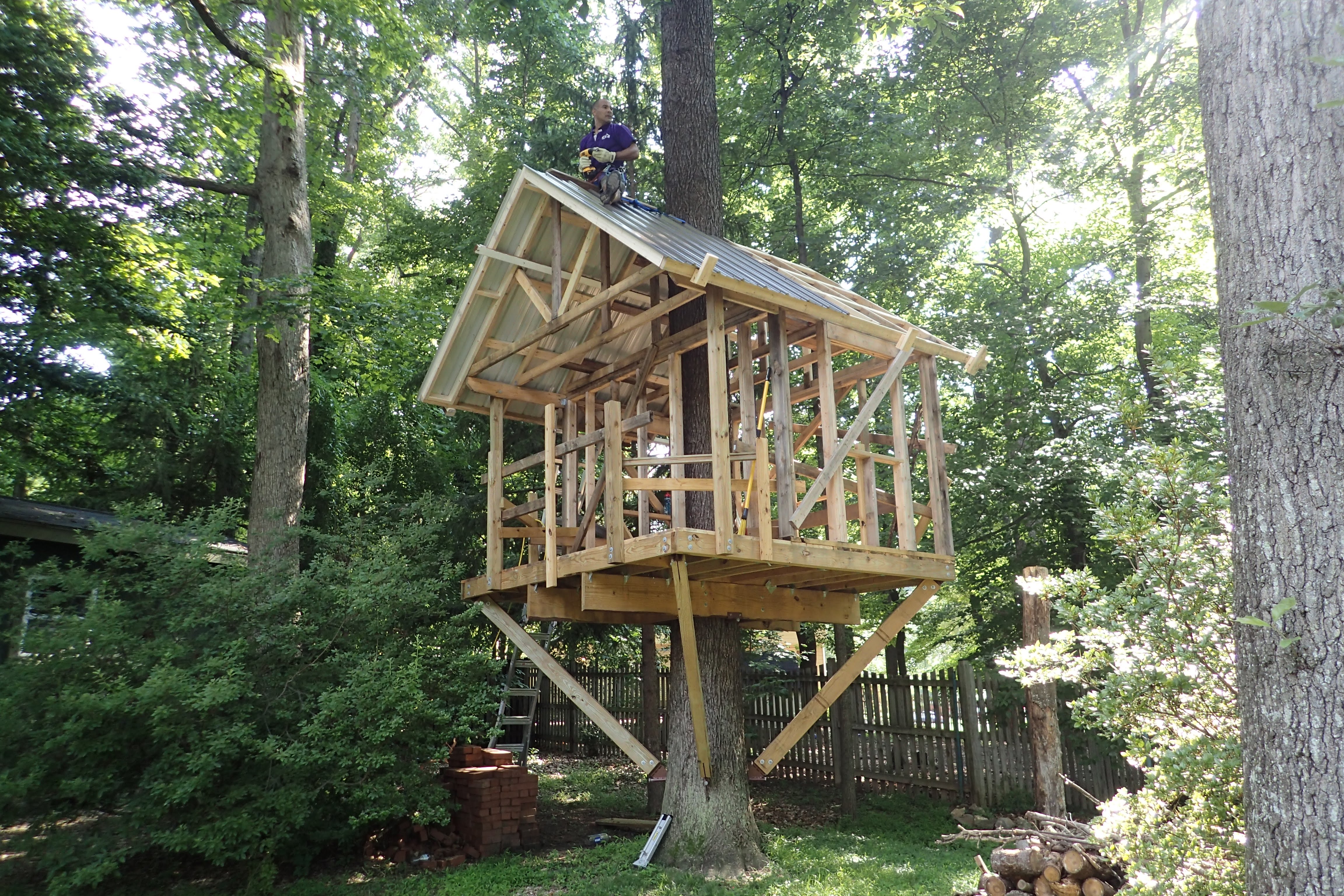 11 Likes
Dewalt V-Groove Z-Axis
The z-axis is my only hang up
Router selection Europe
MaslowCNC State of the Tech 2019
Project of the Week / Community Gardener for August 15, 2018
Maslow expectations/limitations?
jwolter August 3, 2018, 12:17am #2

You make something that nice and they will never move out, even when they are 30!

well, as long as they move into the tree house, I could probably live with that

I am just hoping that it occupies them enough that I can get some free time to finish my Maslow and actually cut something with it. I have neighbors waiting for projects!

I’ve been reading the forums on this same topic. There are two people that have made a Z axis and are using it on a maslow and there are a few that have shared thier plans for their z axis, but have too busy to actually get it going. I bought some stuff off aliexpress and when I get it in a few weeks will let you know what I think works best. .The open builds stuff is nice but it costs double to tripple the same stuff from china. I guess if you are in a rush it is nice though.

I agree a dedicated category would be useful.

I am in the early stages of building a “proper CNC” style Z-axis and spindle sled, ie: I have all the pieces of the puzzle, now I just need to work it out.

I have started a new thread here: Over sized/over engineered spindle Z-axis

I have a smaller (about 24”x24”) tabletop Cnc router, and I used left over parts to build a non standard z-axis. I can also use the same router or get a second of the same. No interference with the ring also because the router base is removed. 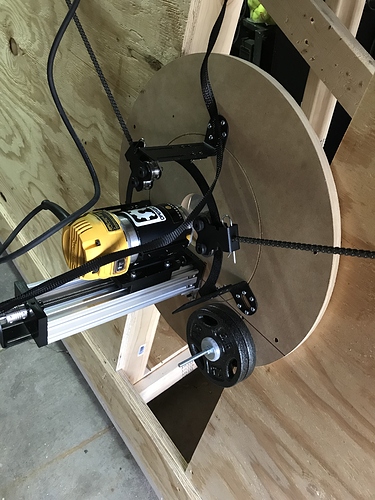 Router is a DeWalt 611 and the axis parts, what I didn’t have are from Openbuilds and Inventables.

I should try and take a better photo. The Maslow z-axis motor fit just about perfect to the extruded channel with the Maslow bracket. I had to get an 8mm motor coupling and drill it out slightly for the motor shaft.

I was hoping this topic would take off a little more.

For someone trying to upgrade to the “Cbeam” style Z Axis, what is the shopping list and procedure? I see some awesome Z axis upgrades that are probably out of our league, but the Cbeam and upgraded (faster) motor sound like something we could get behind to eliminate the router base and associated problems.

Anyone? There is a lot of noise that makes it hard for a simple guy like me to boil down to the signal. Even just talking about which z axis motor to order had several options and I don’t understand the differences!

Are you planing to use a router and what router, or a spindle is question 1.
Routers are heavier, ergo more powerful z-motor required.
Spindles are lighter, generally designed for longer continuous working and can easy brought down to a RPM suitable for the feedrate of the Maslow.

We have the recommended Rigid router (R202202 or something?)

I have seen the 3d printed file for the bracket to go around the router and attach to the new z axis “tower”. All good with that. My main concern is which “tower”, motor, and any needed cables to get.

Trying to find the post with one (faster) that has been tested and posts with suggested ones.
The is is also a post in the depth of this forum with the original motor and a gear (belt) ratio to speed it up. Not lucky right now with searching, give me a moment.

I’m looking at this one:

[20171223_220716] I finally received the $50 rail slider and was able to design a small footprint z-axis that fits within the footprint of the original sled design. I also added both kinematics hole patterns to the sled for easier testing.Sled R3 upgrade.dxf (403.9 KB)

Which has a bunch of info and links but I got confused looking at it all the options and discussion with terms I’m not 100% sure on what they are.

I suggest that if you are confused by all the options, you go with the stock z-axis motor. It may be slow, but all of the parameters for it are known which means less experimenting on your part. Also the cables are readily available from Maslow.

With the original motor with belt gear must be in this post The Meticulous Z-Axis
If you haven’t already it’s worth to go through as much info is valuable for the Cbeam also.
My approach for the upgrade will roughly look like this, but with a spindle. 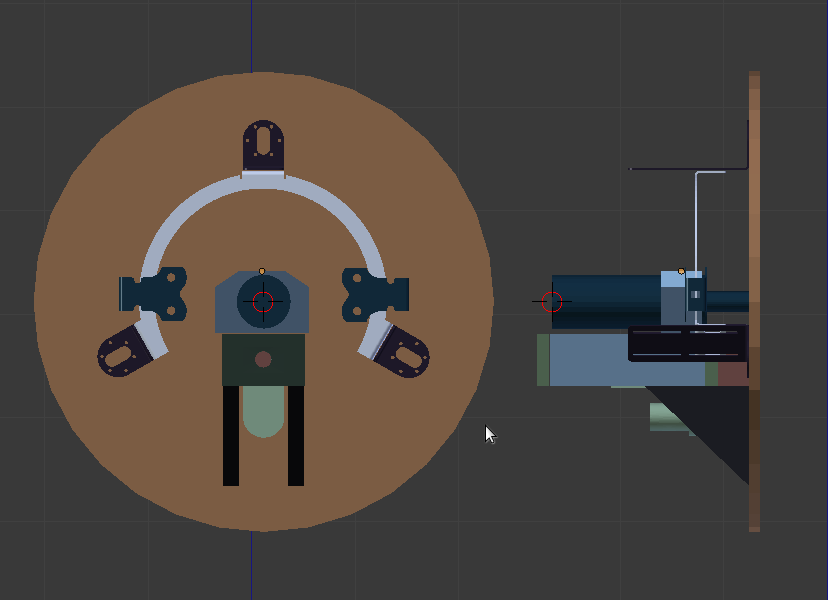 That’s what we’ve got currently, but the shortcomings are rearing their head. Is it not possible to buy the sliding beam/tower design, 3d print the bracket from the files, and attach an upgraded (or, I’d guess, even the current stock Z axis motor from Maslow we’ve got) motor to the top? THAT part doesn’t make me nervous, but motor specs themselves and stepper motors and that stuff is what can be overwhelming.

Does the shopping list in the community garden help?

Is it not possible to buy the sliding beam/tower design, 3d print the bracket from the files, and attach an upgraded (or, I’d guess, even the current stock Z axis motor from Maslow we’ve got) motor to the top?

It is possible, and probably the easiest way to go. If you use a belt design, just use two sprockets of the same size (and number of teeth) for the belt and all the numbers stay the same for the motor (you may need to change things based on the pitch and number of starts of the lead screw, though). I have been away for a long time, but unless something has changed drastically, I think stepper motors would be the wrong way to go.

shortcomings are rearing their head

Which shortcomings are you referring to? I know there are a few, but what is your goal?

It does, thanks! That version looks a little more in depth (but probably with better results I imagine) than the pre-made units I’ve seen photos of, but I’ll check that out more closely! 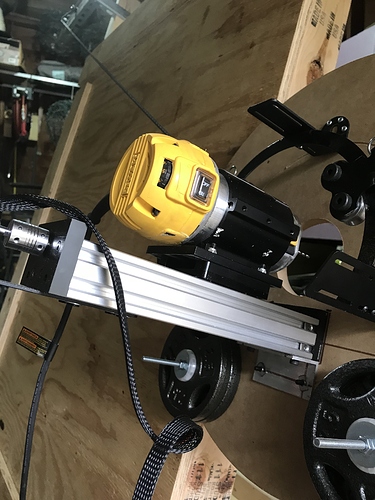 Here is what I am using for my Z axis, a C beam. I can make up a parts list, if interested. I am using the stock Maslow Z axis motor, I just turned the mounting bracket around and it lined up perfectly. I had to enlarge the slots in the bracket to line it up with the channels in the C beam. In my opinion, the Maslow axis motor has no problem with the job, only have to change the pitch to just a smidge over 8. Clean and simple, and uses the same router as my C-Beam conventional CNC machine. 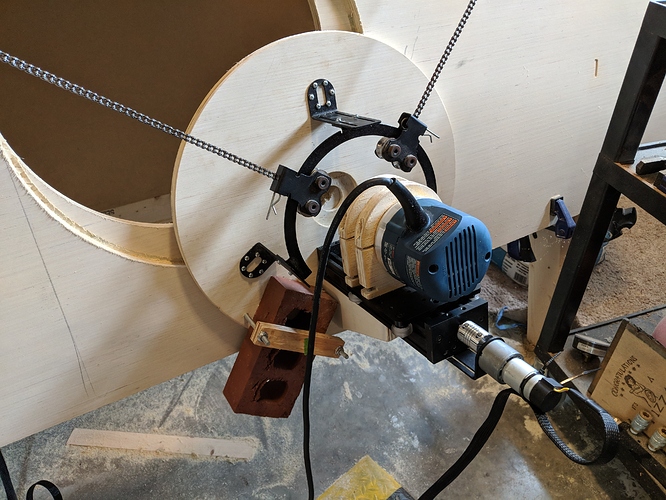 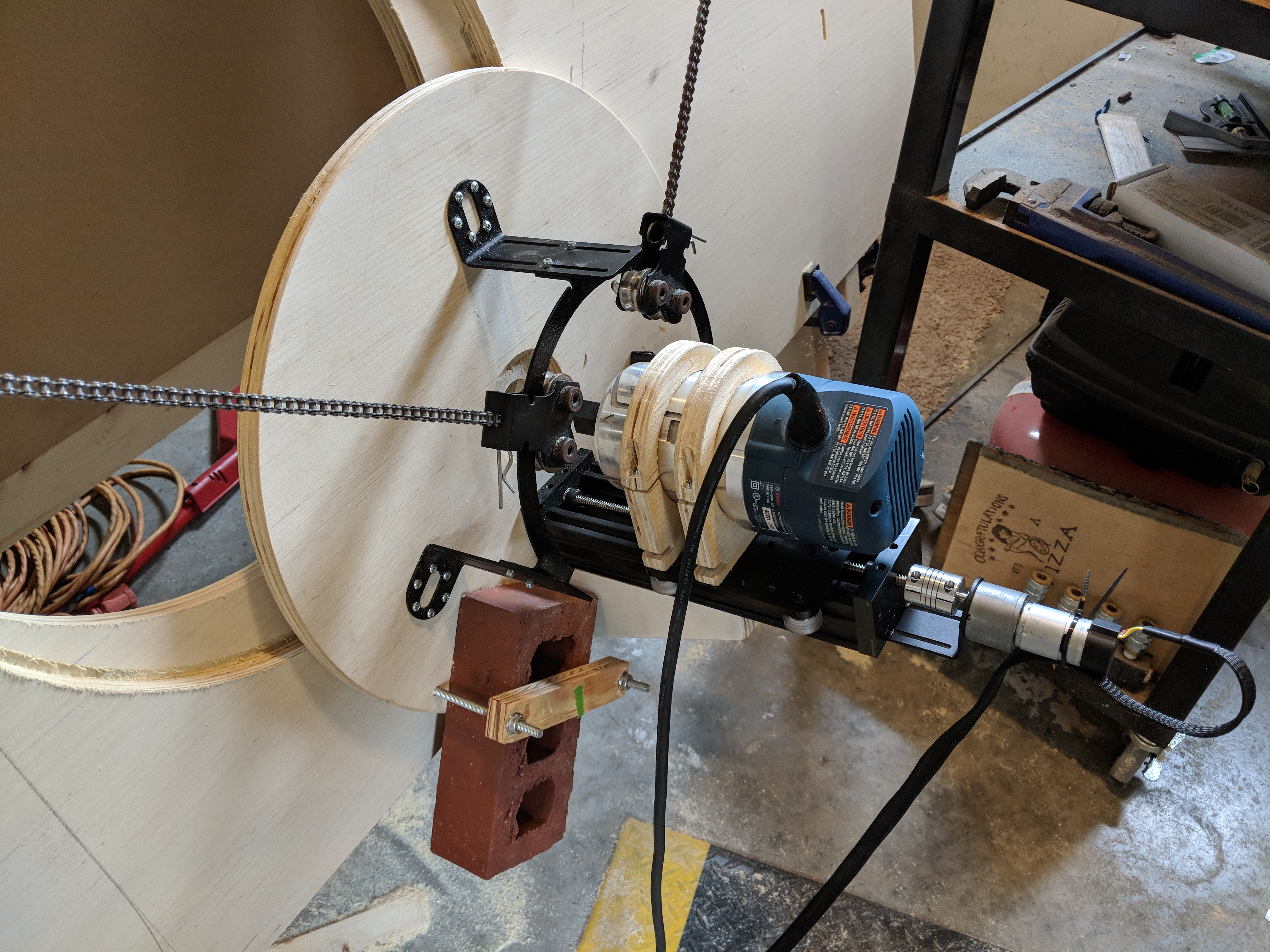 Just finished my Z-axis Mod based on the C-Beam® XLarge Linear Actuator from Open Builds. I have all the CAD available in a public Onshape document and was thinking about doing a how-to if there is enough interest. I am still in the testing phase so there may be some changes down the road depending on performance.

I would love a how to and links.

Also can a stepper motor be attached to the maslow board for the zaxis? I have a few laying around and I think accuracy wouldn’t be much of a problem for the z.