I raise this question with the idea to perform more torque demanding works (shapering, milling), both by increasing stability and reducing unwanted torque effects on the sled. 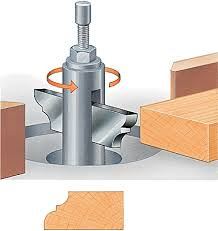 . With pressed wood or Medium Density Fiberboard, it would certainly be alright, but I don’t think so with solid hardwood like oak and knots : 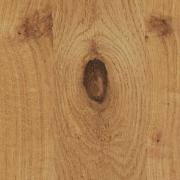 So, a 4 chains version of the Maslow replacing the bricks by 2 additional chains might be a solution. 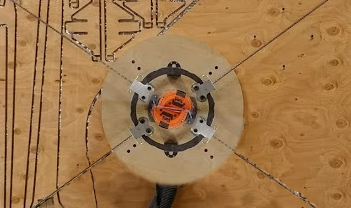 And it could certainly be as simple as two Maslow integrated together with common frames and sled. The drawing would have to be 180° rotated for the second Maslow, then the zeroing would make the drawings coincide. For long works, controlers would have to be synchronized to avoid time shift between both maslows (if not, lag can reach 180ms per hour). I assume that the assembly elasticity can deal with the maslow 1mm precision.

What do you think of it ?

It would certainly be a nice maslow 2.0,but for now, just make the shape on the maslow, and use a router table, or a spindle moulder.
Something i tend to say here, use the right tool for the job, i’m pretty sure i can cut a board with a powerdrill, but a saw would make it a lot easier and the end result would look a lot nicer.

If your still after the goal of doing 2.5D on the area of a ply sheet, you are far better off with a system not relying on a sled riding on the surface. Before dealing with synchronizing motors/encoders (not steppers), if you don’t have the space to go horizontal, 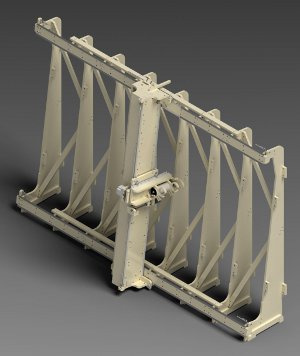 A rail system is the way you can achieve it.
Image stolen from:
https://buildyourcnc.com/Item/cnc-machine-greenLean-v1-milling

Edit: Dear Flagbot and Admins, kindly do not flag me for this link.
I do not work for them, will not receive a bonus, nor do I recommend the build (Frame after strategic improvements, could be cut on the Maslow though). Thank You.

How much overkill would that frame be for a maslow? I just like the look of it

At $7000 it’s for another type of costumer as the maslow, but i like the idea.

There is enough data there that we could design that frame as an alternative frame.

Using a pulley system with a counter weight could allow you to use the same motor and chain to move in the horizontal axis. Bricks and the second motor would control the vertical axis. Of course the z axis would control the depth. The only main difference is building the gantry. A maslow owner could potentially build this upgrade for under $200.

This is a common idea for people to raise, but it’s a lot harder than you would
think.

It would double the cost of the kit, and the math for getting the correct
tension on the lower motors is non-trivial.

Unless you raise the machine a foot or more from stock, your motors are going to
suffer badly from the chain angles for cuts along the bottom.

I would suggest that you test and find where the limits of the existing machine
really are for your use before you redesign the machine.

Using a pulley system with a counter weight could allow you to use the same motor and chain to move in the horizontal axis. Bricks and the second motor would control the vertical axis.

@Sharpsburg_Woodworke Could you elaborate please ? Do you mean keeping the Maslow actuators but changing the commande control for one motor per axis and changing the frame to a X-Y table, or do you mean your proposition here ?

I think you have the point. Here is a quick drawing of the idea. 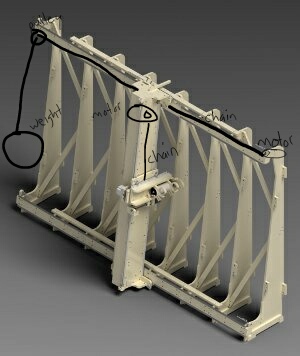 You can use the motors from the maslow along with the chains and the z axis.

if you want a gantry machine, go to a coreXY approach and have the rails vertical rather than horizontal so that they don’t accumulate sawdust on them.

no need for a weight.

you will also have to make major modifications to grbl or the maslow firmware to drive the thing.

I don’t plan to change my maslow by any means. I love this concept and bars hard work on a beautiful design. I was only proposing a different approach that could essentially be built with the maslow kit. The core xy would require a lot more equipment and is a lot more complex.

coreXY doesn’t require any more equipment than any other gantry, it just is a
way to have the motors in a fixed location (so that the motors and their wires
are more stable), at most it needs an extra couple of idlers.

and a H shaped corexy gantry has the advantage of no rails under the
cutting tool so that shavings don’t muck up the works. CoreXY adds ‘no chains
under the cutting tool’

I really love the idea of a gantry that you could cut out using Maslow and then power with the Maslow electronics. There are things for which a gantry would be better (3D surface carving…etc) and making both options accessible would be really cool.

I have thought about this, too. It is easy to find things the Maslow cannot do. It is a bit of a trap, because you spend your time thinking about what can’t be done, rather than thinking about the things that can be done. I have finally settled on the fact that there are better, more capable machines. However, the Maslow is cheap, simple, and very capable. If and when I reach a point in which I require 3D routing capabilities, I will use the Maslow to create something capable of 3D routing. Until then, I will accept the Maslow for what it is, and use it.

I would, however, like to see a few motivated individuals design, detail, and troubleshoot a router like @Sharpsburg_Woodworke displayed. It would require quite a bit of coordination with @bar, to find a place in the forums, to appropriately organize the code, etc. I think it is a very meaningful future step.

Thinking about this some more; I imagine there are quite a few people out there who would like a gantry machine that is capable of 3D milling. I imagine several individuals are even willing to do upfront development work, to create an initial design and start testing it. My question is to @bar; how difficult would it be to create some space to start this? An initial list of things are: find a “lead” individual (an owner, or a group of individuals willing to contribute); create a category within the forums, wiki, etc; create some rules and guidelines for how code developments get merged with developments for the stock Maslow.

If there is enough interest, just create the space and let 'em run.

That’s a plan I would start with as first Maslow projekt if it was available plan for it.

People can use left overs to make the build. and boom you got a “99%” good working cnc someday.

it wuld knock out the market for CNC I think

I’ve got a plan to create a space for projects exactly like this. I’m at least a month away from having anything up and running, but its in the works!