I ordered my kit in June, just put it together. I used Rexklein’s design from long ago. I think I like the design but I am a little lost on calibration. I have installed pillageTHENburn’s linkage kit. 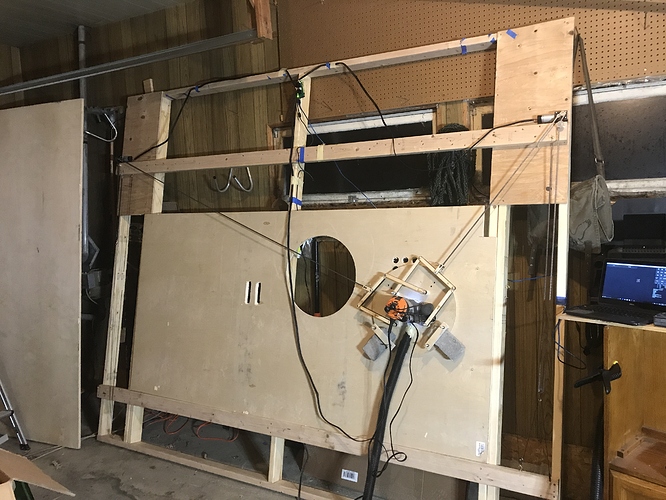 maslow 002.JPG4032×3024 2.25 MB
This is the setup. I ran the configuration, but skipped the linkage configuration step because it moves the sled too low on my frame, and the sled tips in a way that the top of the sled is well off the work surface. I just noticed that in the software, the top of the work area is about a foot below the actual top of my work area. The way that the sled moves horizontally is also not right. The sled dips in the middle. I know i need to adjust some measurements, i just want to know where to start.
2 Likes
Alternative Frame design from Beta Testers?
Arushur November 17, 2017, 3:40am #2 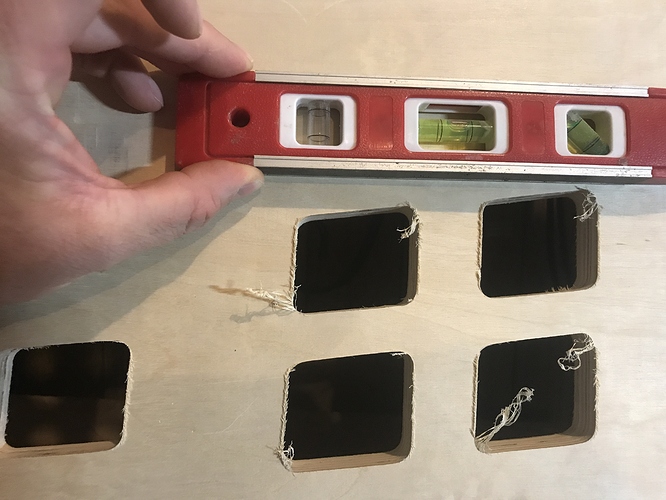 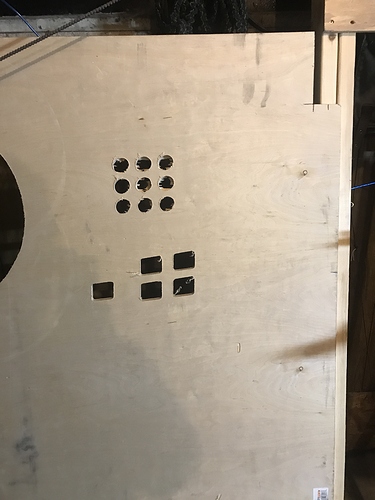 The calibration can be very non-intuitive, or at least I’ve found it to be non-intuitive and frustrating to start changing measurements by hand. I would recommend trying to make the automatic calibration process work.

The first thing I would try is to do the calibration process again (unless you’ve done it multiple times with the same results). It’s possible that something strange happened the first time and it might just work.

If it still isn’t working I want to know all the details so I can figure out what is going on and fix it. If you are willing to do a summary of what happens in each step, that would make my life so much easier for improving the process.

If you just want to make the darn thing work tonight I would say do the process again, but at the step where you use the chain to measure the distance to the top of the sheet retract the chain until it is above the sheet. This will move the entire work area up (without distorting it) and probably make it so that the test pattern cuts are not off of the bottom of the board.

Let me know how it goes and what feedback you have about how to make the calibration process better! 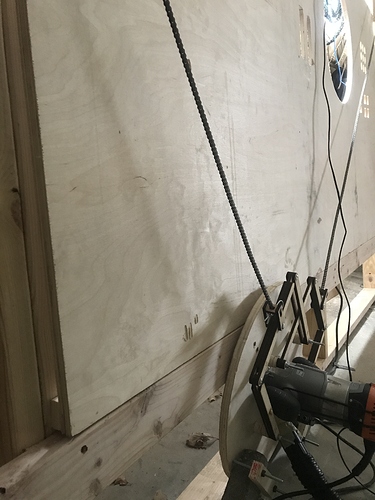 In the photo, the test cuts are above and to the left of the sled. The chain and elastic got too slack and ran off the motor, this is where the sled landed.

I tried changing the distance to the work area, and measured the motor distance by hand and changed it with almost no difference. I did, however change the distance between mounting points. I havent been able to complete the triangular kinematics part of the configuration due to the sled falling off the bottom of the plywood, so i just did a rough measure where the machine thought center was. the value for standard maslow is around 209mm, and sitting at center with the kit installed it is more like 409mm. The sled is sitting close to centered now, and i hope to complete the calibration soon. It was around 8 inches low before

Right now the calibration process makes a guess that the radius from the bit to the arms is about 260mm (I think) which should be about right for that linkage kit. I’m going to add a step where instead of the calibration process making a guess it lets you enter a number as the rough estimate and then refines it from there. It might take me the rest of the day to get it done but hopefully I’ll have something soon.

I am very interested to hear if you’ve had any success. I’m using a very similar frame & the same linkage kit…and am having the EXACT same problem when trying (unsuccessfully) to complete the calibration and test cuts. The “Home” position is pretty darn close to the center of the work area, but the router heads to the floor each time I try to cut the test pattern.

Will not be home to share any specific data for a couple days, but don’t want this thread to die. Thanks for sharing!

I looked at the code for the calibration process and I didn’t see any glaring typos on the triangular calibration process. I’ll open a issue on github for this because now I see three people (including me) having the same issues… so it’s not just me doing something wrong.

I’ve given the calibration process a go using a fresh install of Ground Control and same linkage kit that you are using. I made a couple fixes along the way and I wasn’t able to get the sled to fall off the bottom so hopefully I fixed the issue with the changes. Would you be willing to test to see if I did?

What operating system are you using? I will make you a compiled version to test, or if you are running the code directly the latest version on GitHub has the changes. 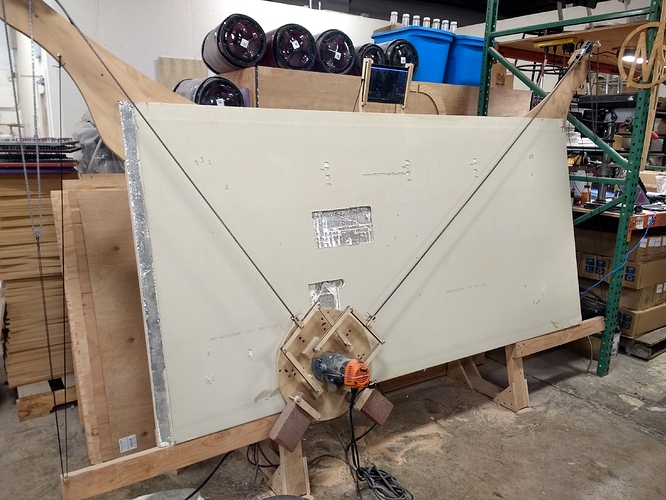 I think my issue is that I’m still using the temporary frame resting on the floor to cut out my pieces. My calibration with the temporary sled was apparently off that most of my pieces weren’t usable in the final frame, but I did get a decent enough circle to make a roundish sled out of it. So I went ahead and installed the linkage kit and wanted to recut the final frame pieces. With the frame sitting on the floor, the picture above would be a problem.

So, I re-reviewed the g-code and it looks like the test pattern is supposed to drop the sled 400mm (~16 inches) from center. That’s too low if you are using a temporary frame and a full-sized sled. It would be ok if it went up 400 mm. Is it a better calibration down load rather than up high (more chain released)?

Ooohhhhh! That makes perfect sense. Thank you for clarifying! I understand now.

You should totally be able to change that number to something less than 400 or even 0 and it will still calibrate OK. The error in the distance is amplified at the bottom which is why the test is done down there, it didn’t occur to me that would be an issue with the temporary frame resting on the ground.

What is the best long term solution? Do we need to do the calibration process higher up at the cost of sacrificing some accuracy? Do we want it to be user selectable (Maybe just like a drop down with a couple options)?

I vote for it to be configurable… strong vote. I’d actually like to do the test at multiple heights and then be able to decide when happy with it. And I’d volunteer to do it, but I never coded python or kivy (or whatever).

Dropdown - > Temporary Sled, Final Sled, Other? Other is configurable? Temporary assumes a smaller diameter than Final?

I’d suggest dropdown be based upon frame… Final frame could be lower value and temp frame would be a higher value. anyone using a temp sled on final frame should just give up

I was thinking a vertical slider along the side of the buttons that would just let you move everything up and down. I always us the same sheet for calibration and it’s getting crowded

Maybe include a warning then that says if still using a temporary frame, don’t select lower than x (200mm?) for calibration point.

doing the calibration in different places will give you different results,
especially moving to the side.