We’ve been working on something BIG (and open source) that we’re really excited to announce on Wednesday, but as a teaser here’s some raw footage from a timelapse I shot today cutting out some parts. I think I’ve got my calibration really dialed in so my straights are really straight, but that circle it cut in the center left wasn’t planned. I think it’s a new bug because I haven’t seen it do that before. I guess the whole point of building things is to find these bugs. Can anyone guess what we’re building?

No idea. Can’t wait for the reveal. Those cuts look fantastic.

I thought the name “POD timelapse” would give it away… nope. No idea!

I thought the name “POD timelapse” would give it away… nope. No idea!

I hadn’t thought of that. Maybe “plain ol’ desk”

How about something along these lines: POD

Lots of slots and horizontal tabs… I am curious about the very deep notch on the extended bit. No clue yet. More clues!

Also, other than that fun “bonus circle” cut out, calibration looks amazing!

It’s the frame work of the open source MakerPlane https://wordlesstech.com/wp-content/uploads/2013/08/Open-Source-Aircraft-that-costs-only-15000-3.jpg that @hannah and @bar are going to use to fly to all maker fairs

Well at first I wanted to say a bench, but that angle is way to steep. Unless that is just an armrest/end piece.

As for mystery circle Did you happen to use a tangent circle there to get that cut, that you also copied and pasted. Perhaps left one behind? Seems very unlikely that the software just randomly spit out a circle 3 times in the exact same place, but never before randomly spit out unwanted geometry.

How about something along these lines: POD

I think you’re on the right track…

Oh, is it a Maslow workstation? Something that holds the computer/dust collector/etc…

A portable shelter for camping?

Any hints? Are hinges involved?

Funny, cockpit came to mind for me too. I was thinking like a flight sim rig, but I didn’t know if Bar would be into that.

Too low to be a table, and too bent to be a chair.

Got it! It’s obviously a time machine for the MaslowCNC. That big cut out on the long side, is the perfect place for a flux capacitor. I imagine that it will “virtually” speed up the cutting process by transporting the cut process, into an alternate timeline where it is finished, and then back to ours only moments after it left. Fantastic!!!
I just hope that the project doesn’t run into another version of itself while in an alternate dimension or we could experience a MSE (Maslow Singularity Event) and then who knows what kacked up version of a project could return. Stray circles would be the least of our worries, to be sure. In any event, for those who have always wished to create with their router in more than 3 dimensions, your wish is about to come true (kinda.)

but I could be wrong.

I’ve been seeing random circles as well in my cuts. I have to review gcode to see if the problems lies there.

Look like some sort of signage lightbox to me.

it’s Wednesday, the suspense is killing me!

Well, clearly this is pretty fun. I propose as we get our machines up and running “Maslow Mystery Project” become a running topic.

A planter box structure? There could be several shleves. So many tabs…

Alright! I’m working on a proper write up for the Wednesday Update, but the gist of it is we’re building an open source CNC made tiny house.

It’s going to be shown as part of community day at the Portland Art Museum in August, then the it will be inhabited as part of the Kenton Women’s Village.

We’ve been working on getting this all together for a while, but now it seems like everything is aligning to make it happen, and we’re starting to do some experimental building! The process began back in October when we learned about the Center for Public Interest Designs program to build tiny house like dwellings as a way to provide transitional housing. They made all of their designs open source, but because the designs were built traditionally they would be difficult to reproduce. We approached them about the idea of doing an open source CNC made POD which could be easily and affordably reproduced, improved or modified by a community all around the world. They liked the idea and we hosted a design contest in which 14 architecture firms submitted designs. Working with The Center for Public Interest Design and the Portland Art Museum we selected a design by SERA architects which was both architecturally inspiring and also practical.

The parts we built this week won’t end up in the final structure, we’re just working out the building technique, but we’ll go over what worked and what didn’t in detail in the update each week and we would love feedback and help from the community.

Here’s a picture of what we built so far (notice the parts from the video are part of the bed structure): 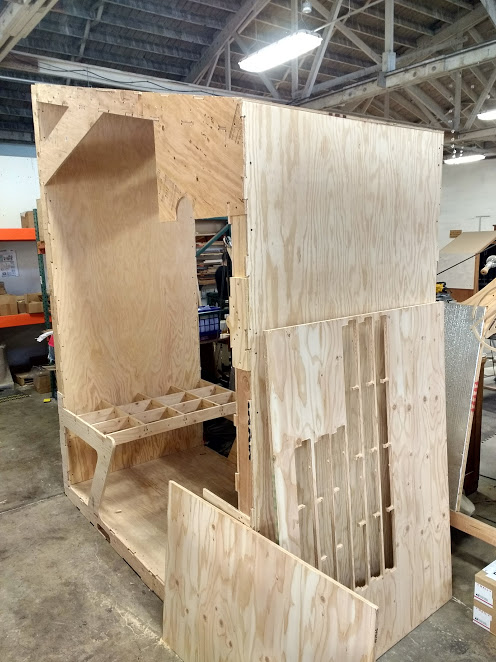 We’re really excited about the project as a way to give back to the community and push the limits of what Maslow can do. Getting tabs to align on dozens of parts across 10 foot spans requires that the calibration be perfect (details on that in the update).

Bonus points to @mdcoley5 got it exactly right! They found what I think is a draft of the proposal to solicit designs for the project. I think the final version mentioned us by name which would have been a dead give away. @mdcoley5 how did you know?

Very cool… but dang, I was sure it was a time machine!

Do you ever sleep?