Even though I cannot seem to get the autocalibration routine to correctly measure the distance between motors, it doesn’t really affect accuracy so much that I can’t accomplish some pretty nice looking work. The twins have social science projects to do and Flynn picked the American Flag while Malone picked the Liberty Bell. I might have gone overboard a little making them (they get to paint them, though). The stars in the flag came out really nice, but makercam is really, really bad at figuring out gcode for pockets. It worked, but incredibly inefficient. I used 1/8-bit for the detail work and 1/4-inch bit to cut out the pieces when all done. I had a problem with “tool change” (doesn’t actually give you a chance to change the tool after the first one… need to file a bug report), but fortunately I was able to recover. 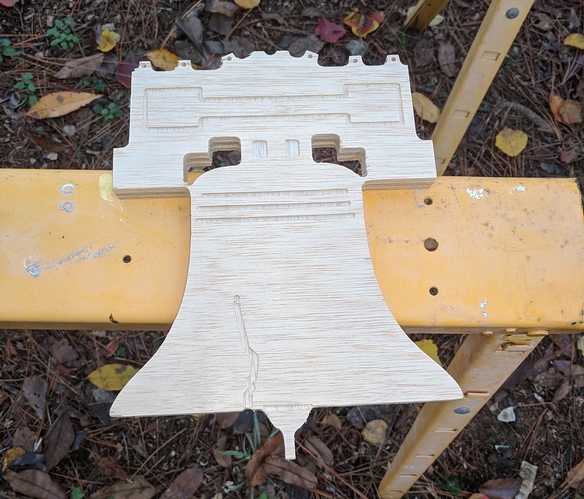 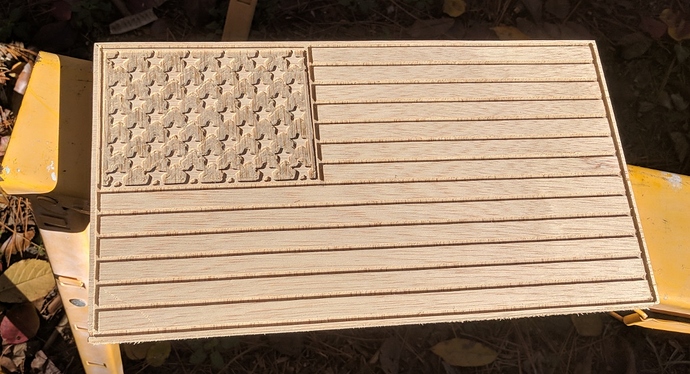 Those are beautiful! Were you able to find files online to use or did you have to design them from scratch?

The flag was from scratch. The dimensions are pretty well documented and I used Visio (what I use at work) to create the image and then save as svg. I’m learning a lot about how to NOT create svgs (Each of those stripes is a rectangle and the top of one overlaps the bottom of another… when gcode is created you end up cutting over the same path twice. Need more lines, less rectangles)

For the liberty bell, I found an outline online and recreated it in Visio. I added a few touches to give it some more pizzazz. I didn’t want Malone to feel slighted though he’s such a sweet kid he probably wouldn’t complain.

I was so pleased with them I almost didn’t let them paint them… but it’s their school project. I helped with a lot of masking tape and wife and I went over their work to even it out. Some of the elements I had to do because the detail was so fine (stars, crack in Liberty Bell, etc.) But still has the “kids school project feel” 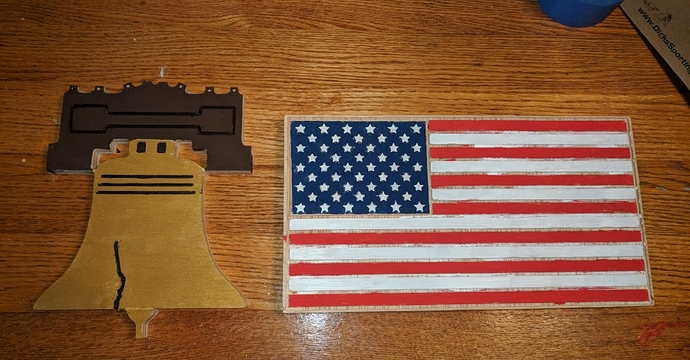 @madgrizzle what a beautiful job!!! With my family and work time it’s sometimes tough for me to justify my hobby time without feeling a bit guilty. Wonderful projects like this will help me out

. I love the liberty bell and the flag…simply amazing!!!

Those look great!
I can’t remember, are you using triangular kinematics?

when gcode is created you end up cutting over the same path twice. Need more lines, less rectangles)

Oh man, I feel your pain on that one! There were a couple weeks early on in making linkage kits when a “bug” in the laser software I was using would “close” all open paths (I have to admit it wasn’t technically a bug, but an obscure setting buried deep in a menu that was poorly translated from Chinese); This meant it double cut every single shared line. Every job took almost double the amount of time it should have! I eventually solved it but it was pretty frustrating watching my time burn away knowing that it didn’t need to be that way!

I can’t remember, are you using triangular kinematics?

Yes, I actually used your linkage kit to build my final frame. The stock kit plus my poor calibration skills at the time resulted in most really bad pieces… but the sled was “round enough” to implement the linkage kit.

The double cuts weren’t the end of the world, what took forever was that the gcode makercam created for the profile was terribly inefficient. First, like a dental hygenist, it would cut in one area, lift up, and then go cut in a completely different area before finishing everything in the original area. Second, it would cut a small area out, lift the bit and move over 1/4 inch, drop the bit again and continue to cut in the same area. It all worked (as seen), but wasn’t optimized at all. I think that easily tripled the time it would have taken. I used a slow feed rate (10 ippm) to make sure things were cut precisely and I think the whole thing took about 3 hours.

Those are super! I bet your kids will be the envy of their class.

I found a tool that optimizes gcode: https://github.com/alsliahona/gcode-optimizer.

Looks like it was last updated 4 years ago, but I don’t know that it would matter. Seems to work. I put my flag gcode in it and it really did a nice job of optimizing the tool path. I haven’t tried cutting it with the new gcode, but it certainly looks more efficient. 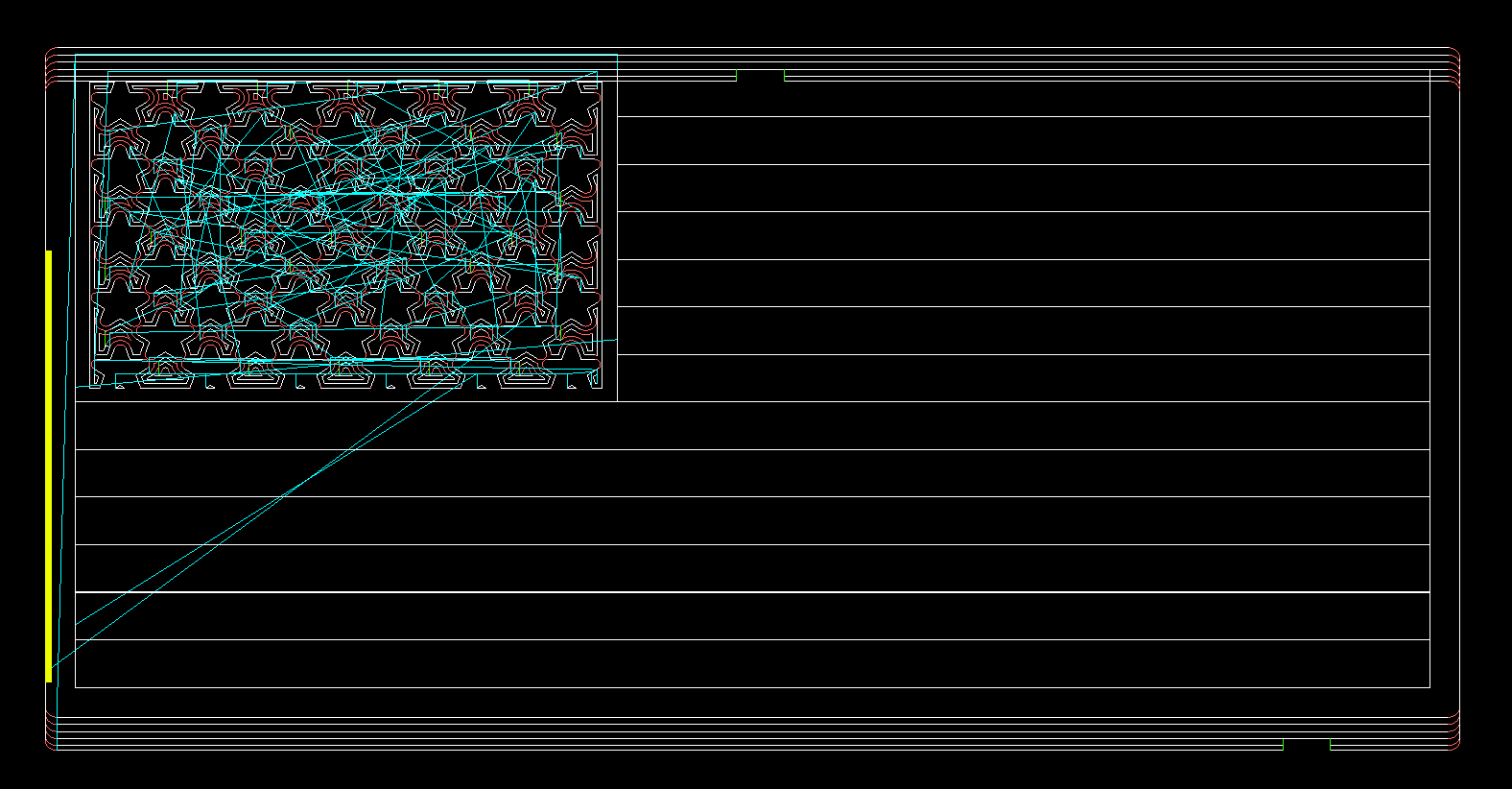 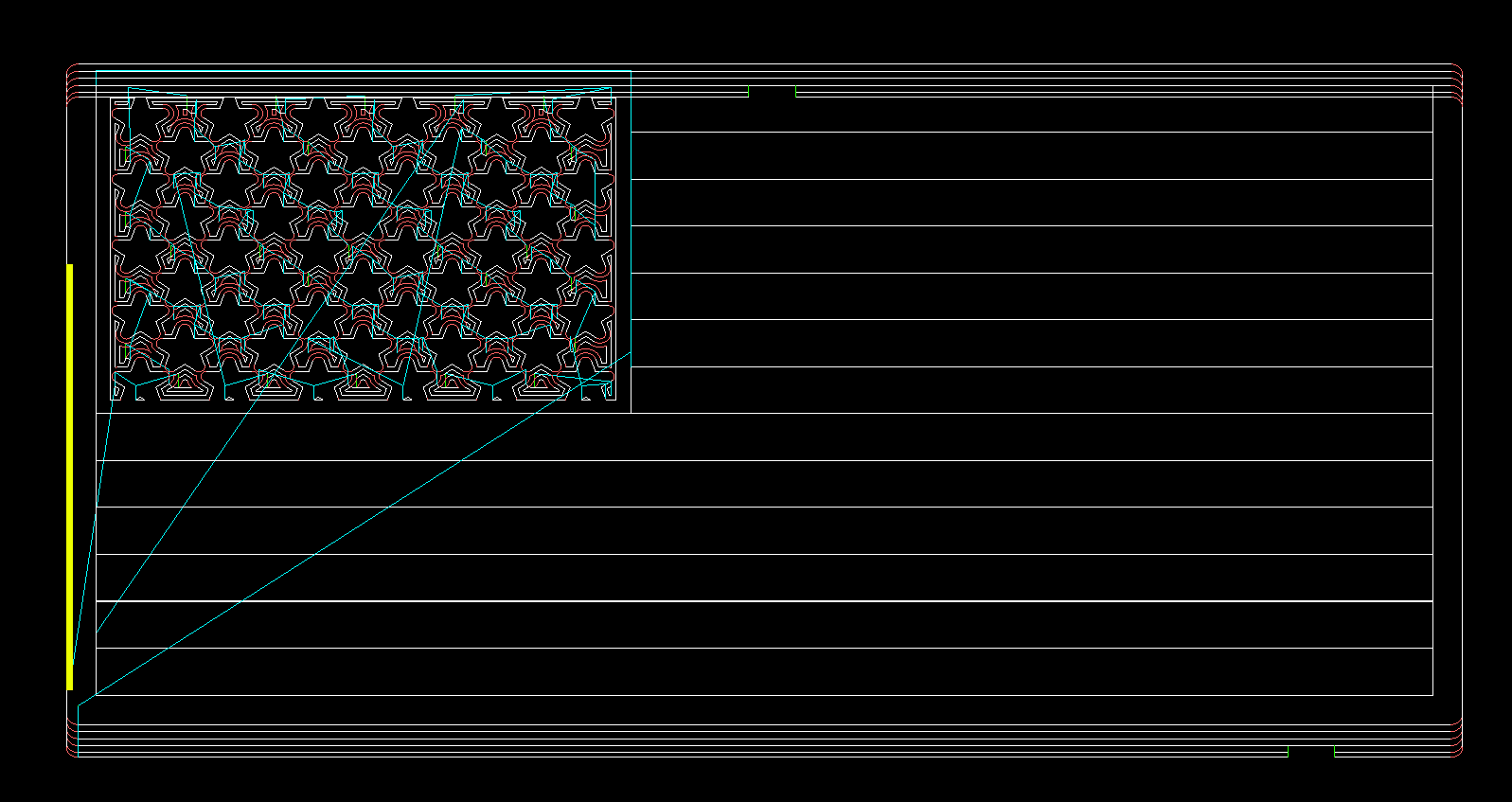 It still seems to lift the router bit, move over a step, and lower it, but at least it doesn’t move all of the place. I’m still looking for a simple gcode creator that does a better job with pockets than makercam does.

@madgrizzle would it be OK if I used this one too? These are all great!

Hello- I have a son in the service and would like to make him the flag. I am new to the Maslow and am still trying to get the designs and g-code working. Would it be possible for you to share your g-code file for that project?? Thank you so much!!!

Yeah, I’ll get them shared in a few days if that’s ok. I want to redo the stripes to cut the time it takes to cut it and I’m out of town. That work?

I posted what I have at the moment. There’s still duplicate cutting (haven’t had a chance to edit them), but I posted the version referenced above that has run through a gcode optimizer. I HAVE NOT TESTED THIS. I’ll try to make a new one sometime soon and work out the kinks. The link is on the Community Garden wiki page: