Thanks for helping, after the geometry is brought into makercam and I deleted all the specs I still have a double line around the outside of this. I click on either inside line or the outside line and both highlight and all I’m trying to d is delete the inside line. I can’t seem to do it.

There is some solution in inkscape to the double lines, let me search.

Hey guys, I’m new to the CNC world. For the last 10 years all of my work has been done by hand with a Dremel. It’s nice to finally have the computer pick up the labor! So I’ve purchased a 6040 with the Mach3 software and everything is going nice and smoothly. Because I’m importing fonts that I have created with my Paint Shop Pro 7 to Inkscape, I trace to bitmap/edge detection and save it as an SVG. When bringing it into Makercam, I can see that its reading the edge detection as 2 lines. These …

title “trace bitmap”… unless my version i just old

It’s still called that and indeed misleading. Some old relict that was never changed i guess.

Good to know. I will be testing it out asap

Yes. Sometimes it is extremely difficult to select only one! I have actually just worked at it until I got it each time I had this problem.
The solutions @Gero & @Keith have for you here will probably be great. I, however (at least for the time being) will stick to deleting by reducing because I have no time to learn a new path right now!

Has anyone figured out to convert an image to a svg file and makercam doesn’t show two line around the edging Tried numerous programs and can’t seem to do it. How does everyone load their files into makercam?

Did you try the thread that @Gero posted?

Here is one more from Giggle: shrinking path or average between 2 paths
Not sure if this helps in your case. Upload the .svg, preferred as a .zip an we will see what we can do.

Edit: Or the image that you want traced.

this wouldn’t work for me. The geometry after the trace comes up with a very heavy outline and I think this is the problem. Makercam see’s this as two lines and not one big wide line so it give’s it a double path.

The one with the double line road? Inkscape after tracing my design gives me a very heavy outline and when Makercam see this it assigns an inner line and an outter line which I cannot break apart. I still have no answer on how to do this, but will keep pugging along.

Makercam see this it assigns an inner line and an outter line which I cannot break apart.

I believe you will need to break this apart in your svg editor and not Makercam. I suggest using Inkscape if you are not already. If you are, that thread @gerolinked to has a link to a plugin which should put a midline between the two lines. This may not be what you want, though, and Inkscape will offer the best options to change the lines before importing into Makercam.

https://www.dropbox.com/s/ljjj25pxxmk1xka/nlc%20push%20stick.svg?dl=0 here is the link for my svg file

Ok. Clear now why makercam will not load it.
The .svg makercam is expecting is a ‘vector graphic’. Your .svg is a very large image embedded in a .svg. Makercam can not process that.
With that image lighting a ‘trace bitmap’ in inkscape will also not create a usable trace.
Try to reduce the size in inkscape to the size to be cut and then draw around the shape. Delete the image once you’ve drawn and save that .svg for makercam. 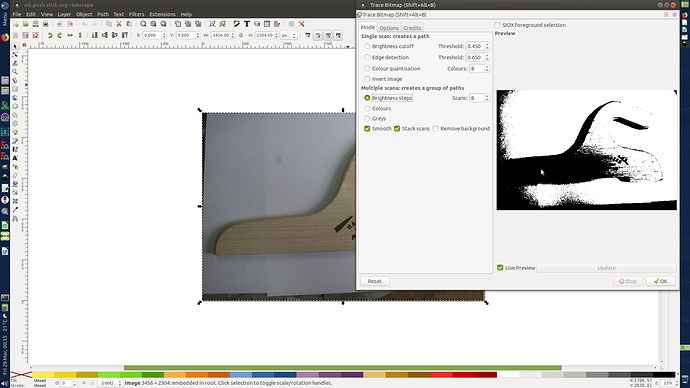 it might be easier to manually trace that.
here’s my attempt, took about 3 minutes. note: this is a bit rough, it was hard to tell where the foreground edge was exactly, but it should be close enough to get you started.

I tried to trace this out, but I not sure how you drew this but all I get is all kinds of wavey lines.

Well, it’s a vector path, so if you want to edit it you’ll need to open it in an app that can edit vector files like inkscape or illustrator. Here’s a screenshot of it in inkscape, after resizing to 16 inches wide and 9.137 inches high 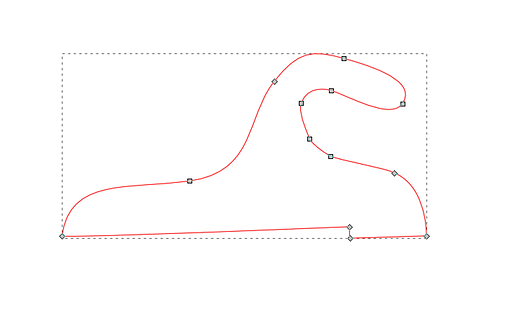 Each one of those squares defines the curve of the line, and you can edit them with the “edit paths by nodes” tool in inkscape. If you click on one of the squares with that tool, it shows the point that is selected in black, as well as the handles for that point and the points around it.By dragging the handles, you can adjust the curve, and by dragging the point, you can adjust the location of the center of the curve. 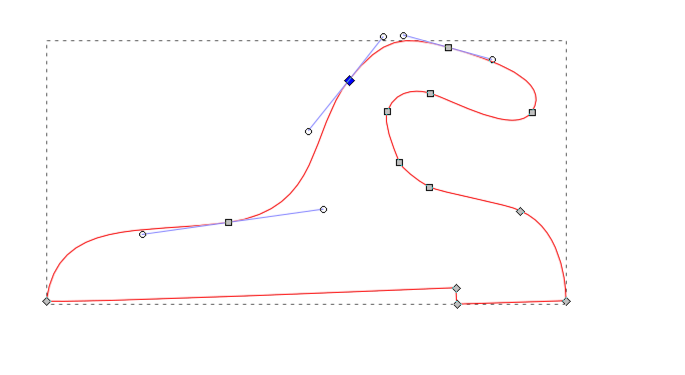 if this is your first experience with bezier curves, you’ll probably get a better experience by watching some youtube instructional videos, this one looked decent for teaching the basic use of the bezier tool in inkscape: https://www.youtube.com/watch?v=4vjcEEFUG9I

@Jatt gives good advice with using Inkscape, but for something that simple, I would probably not use bezier curves (because I find them to be a pain, not because they aren’t useful). If all you are looking to do is make a push stick, then the exact curves don’t matter, so getting even close to a trace using curves would be fine. Inkscape also has a line drawing tool, which you could use to start at the bottom which is three straight lines.

For something like this, I would suggest you draw it in a CAD program. I use AutoCAD, but that is because I have experience with it. I wouldn’t necessarily suggest it as an easy tool.

That said, @Jatt has given you the svg you need, and @gero has identified the issue with your previous problem importing into MakerCam. If you can’t find traceable images in the future, a powerful image manipulation tool (that is free) is Gimp. I often use the threshold tool in Gimp to try to make a jpg into a black and white image that can be easily traced in Inkscape.

Thanks Keith for the trouble. I have used AutoCAD for years but don’t have it at home. I have used Draftsight and seems very similar to AC, but only saves the files in .dwg or (I think) multiple DXF formats. I will try Gimp and see if I can figure it out?

Hi Keith, downloaded Gimp v2.10 loaded my file tried to grayscale but what file type should I saveas so Inkscape could read it, no luck so far!

Thank you Jatt, but I have a very hard time trying to trace around geometry, it usually comes out with super wavey lines or curves.