So my fellow beta testers may remember my Z-axis issues with the Bosch MRF01 Router Fixed Base in combination with the Bosch GOF 1600 CE router. I finally got back to running some more tests on it, including with bungee cords adding downward pressure.

Sadly my conclusion is that that fixed base mechanism doesn’t work reliably with the Z-axis motor unit. I think Bosch’s design makes it unworkable.

From my experience it’s tantalizingly close, but when it fails, it fails in a big way not just small amount of drift.

To be clear, other Bosch router models are known to work.

I could also be missing some trick that would allow this fixed base to work reliably. I’m happy to be proven wrong! Please post here if you have the Bosch MRF01 Router Fixed Base working! However, I’ve now tried applying downward pressure with bungees and that doesn’t solve the problem.

I was trying this too but with the MRC23EVSK model in the same base. Didn’t even get that far, because the Z-axis operated backwards (raise actually lowered, and vise versa). Before I completely abandon the idea,did you run into that issue with the base?

@Josh_G yep, the correct setting for Z-axis is -1.5 to get it to go the right direction and amount.

Please consider writing up your experience, successes and failures in the wiki.

I’ve thought about it, but since it’s not known to work problem free yet, I figured I would cut down on the noise in the wiki by not adding it. However I can see your point that a summary in the wiki might be easier to find than this post. Will see what I can do later in the week.

Thanks @walter and @blurfl… suspected that was the case, but didn’t want to screw up the calibration process if it wasn’t!

@Josh_G let us know how you go!

I’ve had a chance to use it throughout a first project (posted to the projects forum) that was non-trivial, and it was fine the whole way through. The toolpaths involved lots of individual cuts with tabs all giving the z-axis a fair workout and I didn’t have any issues yet. Might be due to the different model router in the same base?

I wouldn’t exactly recommend the bosch for other reasons, but for those that have one already, it’s been a good alternative to a rigid… and I’m glad to not have to give home depot any money! 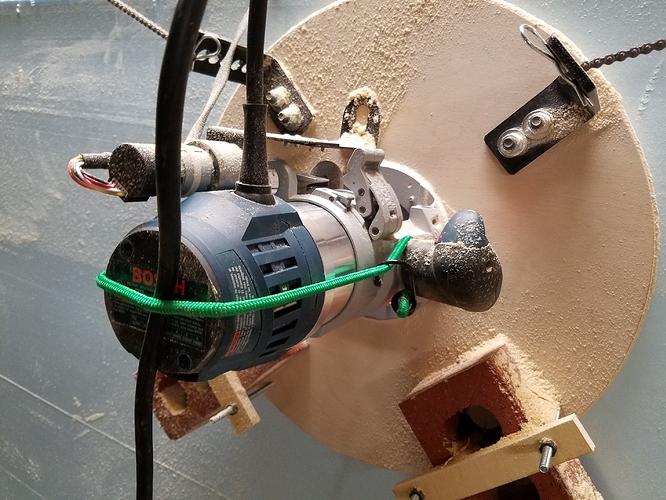 Could you give some more details on your set up, like the following:

Super cool to hear this set up is working. There may be hope for me!

@larry have you had any trials yet?

Thanks for the update @Josh_G! That’s all interesting stuff for me. I’ll update here when I circle back and try again.

@walter waiting until it is dry so I can get power in my new shed…
But good that it is working for Josh, I see the handle is left unlocked.
be interesting to know if there is a slight size difference between the MRC23 and the 1600CE

Placing a side note about triangulation linkage kit compatibility with the Bosch MRF01 Router Fix Base here.

The linkage kit mechanism is not compatible without taking the handles off the router base and because the trigger for the router is in the right handle this seems like a no go. I.e. you would have to mess with electronics.

If the mounting points were set wider in a future version of the triangulation linkage kit, it might work, but right now the handle get in the way of the linkage movement.

I made a version of the top mount kit that allows for wider spacing, a little
over 12" total handle to handle, the first kit will get sent out to Gero
sometime next week, but I have two more available (and if there is interest,
I’ll make more)

It will also be pretty trivial for Logan to make a larger version of his kit.

That should do it. The base handle span is roughly 265mm. I might be interested in your kit.

As usual, I agree with @dlang. The top mount linkage has far more clearance on the sides. He is also correct that I can pretty easily make a 45˚ version with wider spacing (I’ve been thinking about offering that anyway…). The 9" spacing was chosen because it fits well around the Ridgid (and many other) routers and it’s short enough to ship in a standard shipping envelope. It is not, as you’ve found, a magic bullet for every router. Do you already have a linkage kit that you are now unable to use? I would be happy to make you a bigger version if that’s the case!
-Logan

Yes, sadly I do have an assembled linkage kit I can’t use.

I sent you a message.